Triumph of the Bonneville DVD 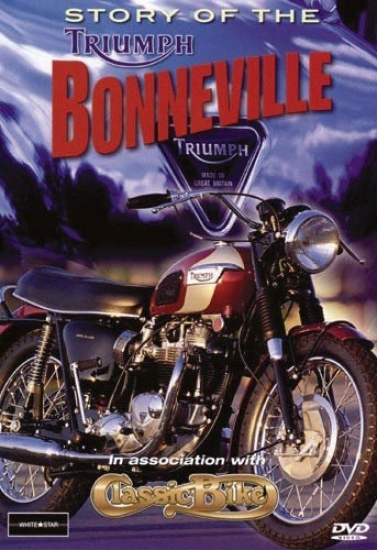 The Triumph Bonneville has the most famous name in motorcycling. It's 40 years since the first Bonnies went on sale yet and its very name still conjures up images of speed, style and performance. As many have said, the Bonneville looked fast even when standing still.

Like virtually every motorcycle produced at the time, export sales were vital to success. America took the Bonnie to its heart. Special editions were produced for road and track. Today, the Bonneville is still manufactured by Triumph at Hinkley, Leicestershire. Indeed, it has become Triumph's best-selling bike, ensuring that a new generation of riders will carry the Bonneville legend well into the twenty first century.

The Story of the Bonneville charts the development of the Bonneville against the increasingly turbulent fortunes of its maker. In making this film, the producers have sought out working examples of different models and filmed them as they should be: 'on the move'.

The film includes specially shot footage of 1959, 1963, 1970, UK & US spec Silver Jubilee and Royal Wedding examples, TSX, and an ex-Tom Rockwood Trackmaster-framed American 'TT' racer, ridden for filming by Freddie Cooper, the first Briton to go 200 mph in the UK - as well as a host of other machines.

There are also interviews with those who rode Bonnevilles for pleasure, the 'Ton up Boys', and those that raced them, including an interview with Chris Lodge who was reunited with the very 1965 Thruxton Bonneville he raced and later owned.

The Story of the Bonneville is a comprehensive account of one of the world's most charismatic motorcycles. Running Time: 60 minutes