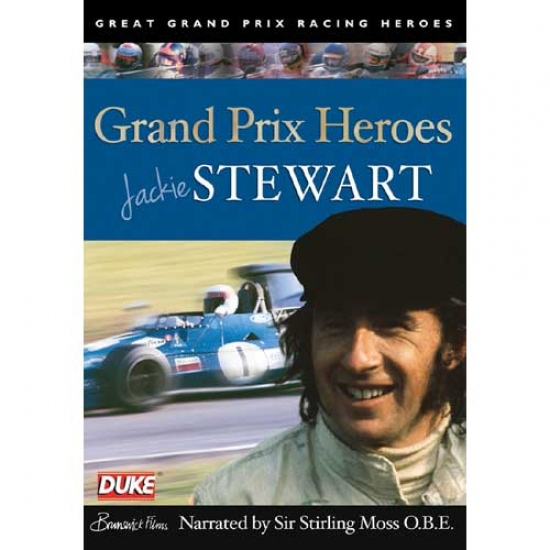 Stunning archive footage transports us to the great racetracks of the early 1970s to witness the races which assured Stewart his place in motorsport folklore. This fascinating reappraisal of a legendary career, which brought 27 wins from just 99 Grand Prix starts and three World Championships, also includes rarely heard period interviews, important off-track film and even a run-in with a youthful Max Mosley!

With narration by Sir Stirling Moss, we see Stewart with his trademark long hair, big sunglasses and Beatles-style cap climbing into the familiar bright blue Tyrrell and battling wheel-to-wheel with great names like Fittipaldi, Brabham, Peterson, Ickx and Regazzoni. There is breathtaking colour race footage from Monaco, Spa Francorchamps, Montjuic Park, Paul Ricard, Zandvoort, Mosport and many more of the worldÆs greatest circuits.

As we revisit the great races, including StewartÆs domination of the 1971 British Grand Prix, we also hear him in team talks with Ken Tyrrell and Derek Gardner, briefing Formula 3 drivers on safety, demanding track improvements from officials and in interviews û notably including one record as he drove a Rolls Royce around the Nurburgring in 1973.

StewartÆs brave crusade for safety in the face of strong opposition was reflective of his bravery behind the wheel. Although a vocal critic of racing at the deadly Nurburgring and in dangerous conditions like heavy rain, Stewart remained a thorough professional and mercurial driver û just witness his domination of the 1971 German GP and mastery of the rain in Canada that same year.

The tragic death of teammate and friend Francois Cevert meant what should have been a 100 Grand Prix career ended after 99 races, but that was enough for this colourful, intelligent, dedicated Scot to make an indelible mark on Formula One, and become a true Grand Prix Hero. Running time: 52mins.