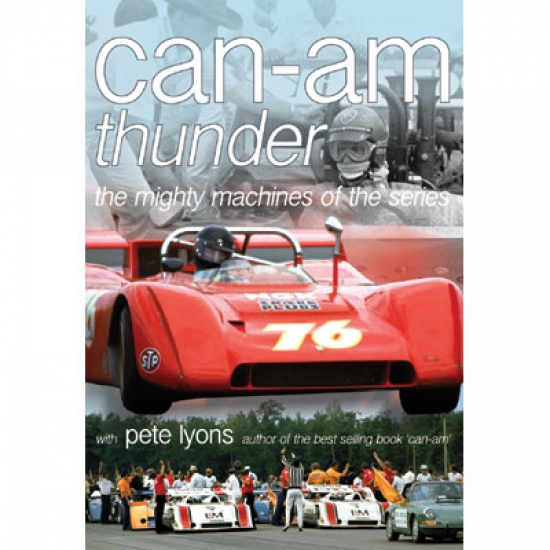 Porsche, McLaren, Lola and Shadow were the Championship-winning cars, with Chaparral, Bryant T22, March and Ferrari as the challengers. We feature all of these as they rumble and roar around tracks like Laguna Seca, with its legendary downhill 'corkscrew' turn, and rocket down the bumpy straight at Sebring at 190mph! We even recall the days of the 'Interserie' - Europe's Can-Am equivalent - by filming at the Nurburgring round of the International Supersports Cup.

Can-Am Thunder features a great combination of modern action footage - including on-boards - and superb archive material from the best photographers of the day. The acknowledged 'number one' Can-Am guru - author and photographer, Pete Lyons - recalls the stories that led to his best-selling books on the series and delves into his photo archives to take us back to the Can-Am era. In this he is joined by another award-winning author and photographer focussing on those awesome days, Dave Friedman. There's also contributions from Hurley Haywood, one of the world's best-ever sports car drivers with three wins in the 24 Hours of Le Mans, five in the Daytona 24 Hours and two in the Sebring 12 Hours to his credit! He tells us what it was like to wrestle with the mighty turbocharged Porsche 917/10 in the heat of Can-Am competition. Plus, Peter Bryant recalls what it was like trying to design a 240mph racing car without the aid of computers or wind tunnels! Time: 80 mins.