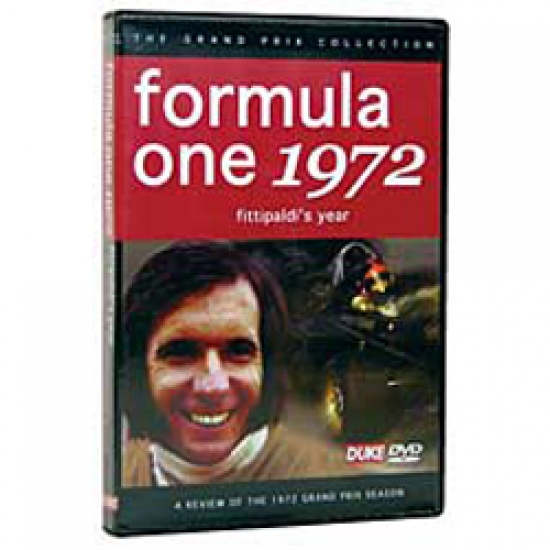 1972. All eyes were on the defending champion Jackie Stewart and expectations were high that he would repeat the total domination of the previous year.

He made his intentions clear with an emphatic win in the 1st GP û cruising home half a minute ahead of the chasing pack. However, there was another driver intent on stealing his crown: Emerson Fittipaldi, a whirlwind of talent and youthful arrogance in his iconic black and gold Lotus 72.

And it turned out to be a thrilling season of on-the-limit action that climaxed at Monza û FittipaldiÆs spiritual home. StewartÆs broken clutch put him out of the race, ensuring FittipaldiÆs place in the record books: at just 25 years of age, æEmmoÆ became the youngest-ever World Champion.

The action wasnÆt confined to the track. The season was full of behind-the-scenes politics, pit-lane rivalry, tyre-wars and battles for aerodynamic supremacy. The superb pit-lane footage and driver interviews featured in this review get right to the source of the intrigue.

Brunswick Films were pioneers in the embryonic days of Formula One production, when sponsors controlled the demand for footage, and before the era of global TV coverage began. They have skilfully combined film from their famous archive - including some previously unseen material - to create a review that captures the essence of a very special era in Grand Prix racing.Time: 52mins