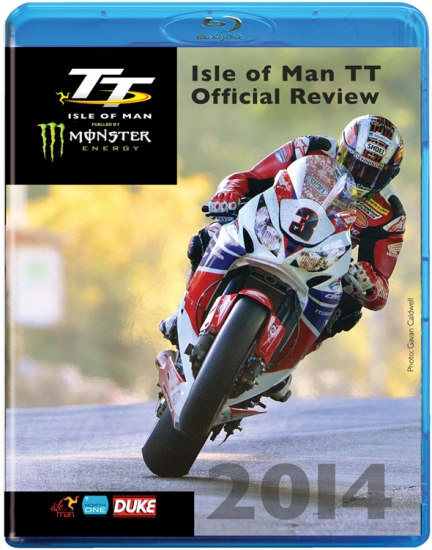 The Official Review of the 2014 Isle of Man TT is 4 hours of breathtaking action from the WorldÆs most important motorcycle road race.

The programme includes coverage of all races, with spectacular aerial, trackside and onboard footage; plus interviews, colour pieces and extras. This is always an incredibly popular release from Duke - consistently a very strong performer. 2014 attracted the most talented, and popular, entrants in recent TT history. Well-known names included John McGuinness, Guy Martin, Michael Dunlop, Conor Cummins and many more.

American motorcycle company Erik Buell Racing make their TT debut with American Riders mark Miller and Brandon Cretu, Danny Webb, former MotoGP rider, makes his TT debut and features on this release. TT 2014 was the fastest TT meeting in history with a new absolute lap record of 132.298 mph. The Review features onboard camera film of this lap. The profile of the TT continues to grow every year. Blu-Ray Run Time: 300 mins.