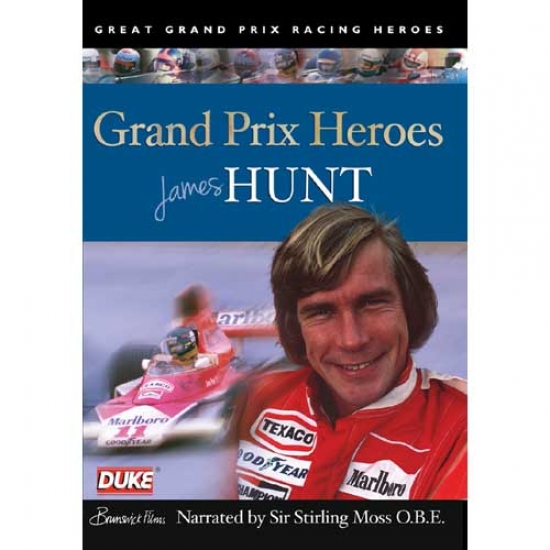 Charming, handsome, irreverent, tenacious and an outstanding talent, James Hunt had everything it took to become one of EnglandÆs most famous sportsmen and a household. However, it was his dogged determination and epic battles with Niki Lauda which made him a Grand Prix Hero.

Glorious archive footage shows us the great racer in action, while rare interviews remind us of the cheeky quips and trademark broad grin. ThereÆs dramatic racing film from his debut at the 1973 Monaco Grand Prix right through to the Formula One World Championship-decided Japanese Grand Prix in 1976, with narration throughout from Sir Stirling Moss.

Despite a reputation which earned him the nickname æHunt the ShuntÆ, Lord Hesketh signed up the young Brit for an assault on Formula One. We are treated to footage from that first year, including HuntÆs maiden podium at the Dutch Grand Prix, and action from 1974, when Hunt, with Harvey PostlethwaiteÆs Hesketh 308 at his disposal could manage only three podium finishes. The 1975 season also proved tough for the team, but the highlight came at Zandvoort when Hunt scored his first, and HeskethÆs only, Grand Prix win û and archive footage lets us share the epic battle with Lauda.

In 1976 came a move to McLaren and one of the most fascinating and turbulent seasonÆs of Formula One racing. LaudaÆs Ferrari led the way with a domination which would have broken the spirit of most contenders. Not Hunt. Neither was his ambition stifled by controversies such as disqualification from two GP wins or a grid penalty æmistakeÆ. Hunt kept the pressure on and at the final race of the year he was just 3 points behind Lauda, still carrying the scars of his horrific crash in Germany.

Some say Hunt won his World Championship be default, due to Laudas crash, but the spectacular and determined racing in this DVD shows he was a worthy winner, and a true Grand Prix Hero. Running time: 52mins.