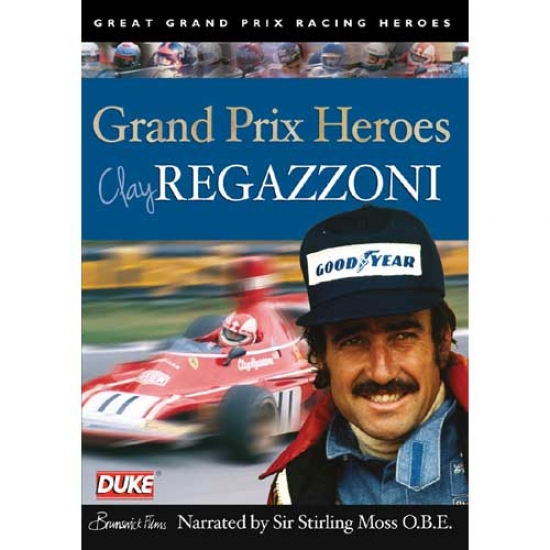 Flamboyant, determined and wonderfully talented, it is little wonder Clay Regazzoni was a favourite among fans. His control of a Formula One car could be masterful, almost to the point of genius, but he had an infuriating habit of throwing it all away with victory in sight. Inconsistency prevented Regazzoni winning the Formula One World Championship, but his always-exciting driving ensured his place as a Grand Prix Hero.

Evocative archive footage reminds us of the highs, and lows, of a decade-long Grand Prix career which marked the Swiss great out as something special. Alongside period interviews with Regazzoni, this is a treasure trove of action-packed racing film, starting with his debut, at the Dutch Grand Prix, with Ferrari.

Sir Stirling Moss narrates as we recall the days of genius, including his maiden Grand Prix win (in his first year, in a Ferrari and at Monza no less), the victory at the Nurburgring in 1974, considered by many to be his finest win, his graceful, faultless drive at Long Beach in 1976 and one of his most incredible days û recovering from 16th to finish second on the narrow streets of Monaco in 1979.

Regazzoni will be remembered for securing the Williams team its first win, becoming a darling of the passionate Tifosi, coming within just a handful of points of the title in 1974 and the remarkable feat of being re-hired by the great Enzo Ferrari just a year after being sacked! These wonderful memories are all featured.

We also recall the dark days, including his battles with an unreliable BRM in 1973, spinning out of the lead of the 1974 Monaco Grand Prix and the crash at Long Beach in 1980 which left him paralysed. Notably, this programme includes the horrific crash at the 1973 South African Grand Prix which almost cost Regazzoni his life. Alongside the footage, we hear from Mike Hailwood, who risked his own safety to pull the unconscious drivers from his stricken car. Typically, Regazzoni was racing again just seven weeks later, and with an even stronger ædevil may careÆ attitude.