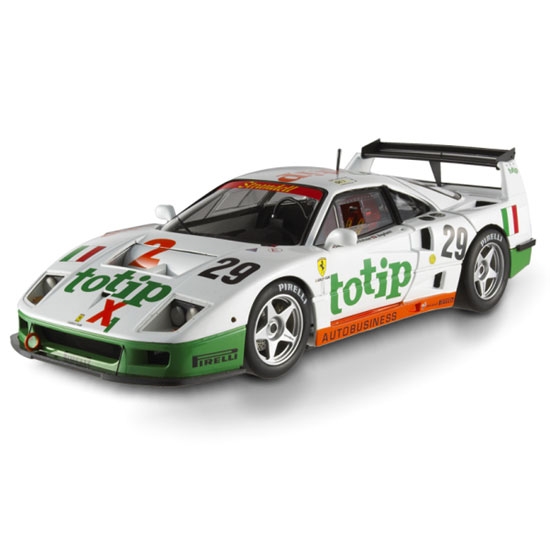 Produced by Hotwheels from their ultra detailed Elite Line. Developed out of FerrariÆs GTO Evoluzione project, the F40 Competizione was a full-house competition version of the sublime F40 and was suitable for a wide-range of racing series. The car took 2nd three times, 3rd twice and came in 5th once at IMSA GT series. The differences between the road and racing cars are subtleùthe carbon fibre splitter, rear diffusers and adjustable rear wing are the most obvious. The car was completed at the end of 1988. When it was tested in 1989, it clocked a maximum speed of 367 km/h and accelerated from 0 to 100 km/h in 3.1 seconds.

Ferrari only manufactured 18 of these cars between 1989 and 1994, the majority of which went straight to private collections or museums. F40 Competizione with race number 29 by Strandell-Obermaier Racing team entered the 1994 24 hours of Le Mans with Della Noce, Olofsson and Angelastri in the driverÆs seat. Enjoy the great level of detail of this 1:18th model!