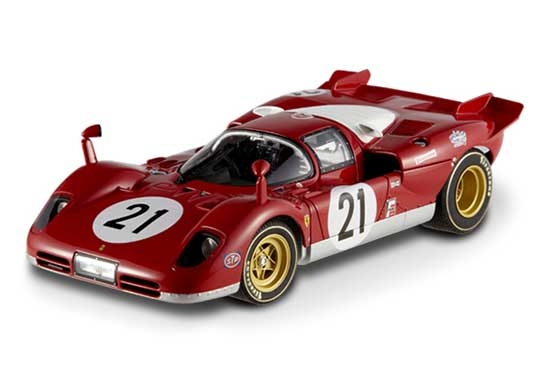 Produced by Hotwheels, this is a detailed replica of the Ferrari 512S raced at the 1970 12 Hours of Sebring. This highly detailed replica features authentic sponsor decals, extremely detailed cockpits and engine compartments. Removable engine cowling, opening doors and trunk.

Limited Edition: no more than 5,000 pieces The Ferrari 512 S was a sports vehicle, related to the Ferrari P series of sports prototypes. The V12-powered cars raced at the beginning of the 1970s in the World Sportscar Championship season. The 512 S numbered 21 was used by the Scuderia Ferrari in the 12 Hours endurance race at Sebring, the second one of the 1970 season. The drivers Mario Andretti, Nino Vaccarella and Ignazio Giunti won this race with an incredible final stint.