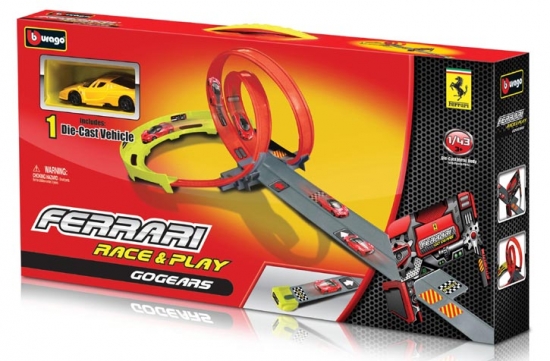 Produced by Bburago, think a Ferrari could defy gravity long enough to make it around a pair of loop-the-loops? Its a stunt we're keen to see, but unfortunately we don't have a spare Italian supercar lying around. Luckily we do have this official licensed Ferrari Go Gears playset that comes with a powerful pull back and go car that can complete this stunt and then some. After a brief drag back along the track, the miniature Ferrari in this set zips off, up and around one loop, into a high-speed corner and around a second loop before completing the home stretch. The impressive car in this set can reach scale speeds of 200mph and travel over 45ft from the shortest run up. Officially licensed Ferrari playset.