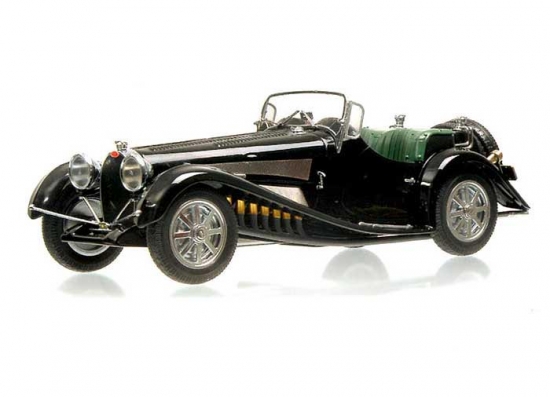 Produced by Minichamps, this is a detailed resin replica of the 1931 Bugatti Type 54 Roadster from the Mullin Museum collection in 1:18th scale. The detail level is amazing. Detailed cockpit, rubber tires and much more. Size: 10"

Model History:
As a stop gap between planned models, Bugatti produced the Type 54. It became a synthesis of the Type 45 chassis with an eight-cylinder engine from the Type 50. It was raced actively from 1930 to 1933 and became known for its brute power among the more nimble Type 35s it replaced. At the Monza GP in 1930, Louis Chiron and Archille Varzi raced the first two Type 54s. Varzi was able to secure third place which wasn't bad for a car conceived and fabricated in just two weeks. A highlight victory came when Varzi won at at Avus in 1933.

In 1934, maximum weight restrictions made the Type 54 redundant. Two chassis were later converted into road cars by Bachelier and Messrs Uhlik.