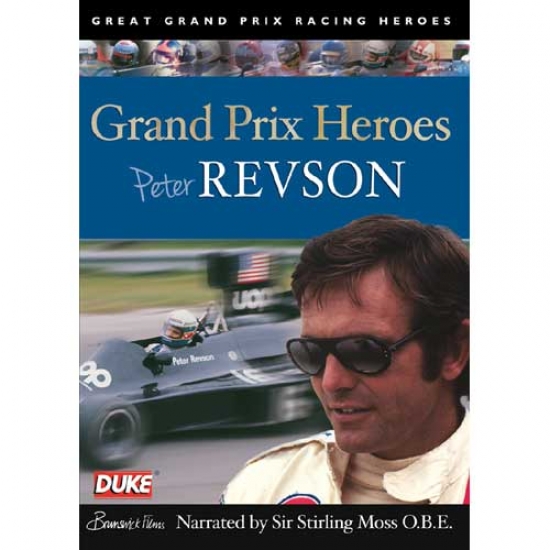 The title of his autobiography, Speed with Style, perfectly describes hobby-driver turned Formula One race winner Peter Revson. As he built a stunningly successful American racing career during the 1960s, Revson flirted with Formula One û but it was in the 1970s he set his sights on becoming a Grand Prix Hero.

Spectacular archive footage and revealing period interviews allow us to reassess the cool and dashing American whose rich playboy reputation could not mask his talent behind the wheel, or his will to win. After sporadic Formula One appearances, including the 1971 race at Watkins Glen featured in this programme, Revson committed himself to his first full Grand Prix season in 1972, driving for McLaren.

Action-packed film from throughout the year lets us share the AmericanÆs journey as he steadily improves, claiming his first podium and the incredible race against Emerson Fittipaldi at Mosport during the Canadian Grand Prix. His dedication brought more results in 1973, including his only Grand Prix wins. Excellent footage shows Revson in action at Montjuic Park, Zolder, Monaco, the Nurburging and other classic circuits as battles to make his mark on Formula One.

The massive pile-up during the 1973 British Grand Prix, captured in this programme, set the scene for RevsonÆs first Grand Prix victory after a dramatic drive. His second, and last, victory came in the controversy-hit Canada later in the year when a safety car was deployed in Formula One for the first time.

Throughout, we hear from Revson himself, as he reflects on life in racing, relationships, rivals, backmarkers and, poignantly, safety. He also assesses his own natural talents with searing honesty, but he is perhaps too modest. As the stunning race footage in this programme shows, Revson had a bright future, a future cut tragically short at Kyalami at the start of 1974. His life may have ended too soon, but RevsonÆs short Formula One career was enough to make him a Grand Prix Hero. Running time: 52mins.