This is the place to discuss everything related to the tenth round of the 2010 season taking place at Silverstone between the 9th and the 11th of July.

To submit your 10 'n' Pole Picks for Britain click here, to register in the competition click here 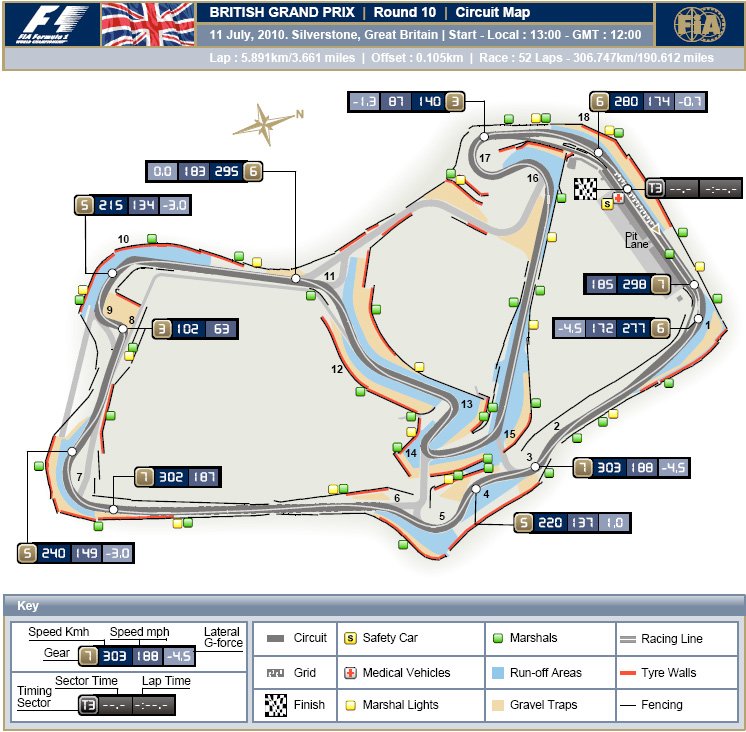 At the mid-way point of the 2010 FIA Formula One World Championship, round 10, teams and drivers will encounter a heavily revised Silverstone circuit. Significant changes have been made to the track this year, aimed at improving the spectator experience, while keeping facilities at this historic venue – which hosted the inaugural round of the Formula One World Championship on May 13, 1950 – in line with those at newer locations.

The new layout is approximately 800 metres longer than the 2009 version and the most extensive revisions have been made between Club corner and Brooklands. Lap times are expected to be around four seconds slower than last year (fastest race lap, Sebastian Vettel, Red Bull Racing, 1:20.735) but the circuit redesign is intended to increase overtaking opportunities without removing its high-speed character. Silverstone has traditionally been one of the fastest Formula One tracks and in recent years has emerged as a favourite with drivers, thanks to its numerous fast sweeping curves, such as the Maggotts/Becketts complex.

Simulations of the new layout have indicated it will require higher levels of downforce to optimise braking and traction through the new infield section, particularly around the new Village corner. The drivers’ championship, meanwhile, remains extremely close, with only 29 points across the top five and with four of those drivers having won two races each.

CHANGES TO THE CIRCUIT SINCE 2009

- The circuit has been completely re-aligned between the former turns 9 and 16.

- A supplementary run-off area has been provided on the exit of turn 18.

- ... but the first grand prix at Silverstone was in 1948: the RAC International Grand Prix, on October 2, won for Maserati by Luigi Villoresi.

- Along with the Monaco, Belgian and Italian Grands Prix, the British GP is one of only four events remaining from the original 1950 world championship. Silverstone, in fact, hosted the first ever round of the FIA Formula One World Championship on May 13, 1950.

- Silverstone is the home or ‘local’ race for six Formula One teams – Force India, McLaren, Mercedes, Red Bull Racing, Renault and Williams – all of which have factories in the UK

The event timetable for the British Grand Prix.

Anyone seen a weather forecast ?

Well given that is the British GP and it is summer over there then I would expect some showers at the very least.

Holy crap on a cracker!

Webbo is a bit quickish.

I would like to vote all three podium getters as Driver of the day.
Webbo was untouchable, Hambone wrestled a pig of a car all day, and Nico continues to make Schuey look old and slow.

Was it Karma or Divine Intervention?
Who knows but justice was delivered!!!
There are no stupid questions, only stupid people.......

Bundy wrote:Was it Karma or Divine Intervention?
Who knows but justice was delivered!!!

The Sci-Fi Station Come by and visit when you get the chance.

Bundy wrote:Was it Karma or Divine Intervention?
Who knows but justice was delivered!!!

Take a pinch of grit, an ounce of determination, mix together and cook over a slow burning anger. Wait 1 day, and......viola !!! Champagne.

I didn't think that Webber would bounce back so emphatically. He controlled the race from the moment Vettel had his puncture. Hamilton drove well in a car that didn't respond to change. Nico Rosberg is showing the former 7 time WC that he maybe doesn't have it anymore and Kobayashi is showing us that there is a Japanese driver worthy of piloting an F1.
Top

Brilliant drive.... brilliant result..... way to go Mark!!!
Good job by Hambone and Button.
It will be interesting to see what happens in the Red Bull garage over the rest of the season.
Will Vettle be asked to support his team mate. hmmmm
The plot thickens.
Holy crap on a cracker!