The fifth event of the Formula One calendar, which is also the start of the European season, takes place at the Circuit de Catalunya in Barcelona, Spain. The 4.655 kilometre track is located in Montmeló, to the north of Barcelona and is a favourite for test drivers. The circuit’s location leaves it exposed to variable winds, making effective car settings crucial to any team hoping for victory.

The track has few slow corners and the sweeping bends are made all the more difficult by the challenging gradients as the circuit runs up and down the hillside overlooking the massive pit and paddock complex. It is one of the more challenging circuits on the calendar from a technical standpoint and it is certain to provide an exciting Grand Prix for spectators and competitors alike. 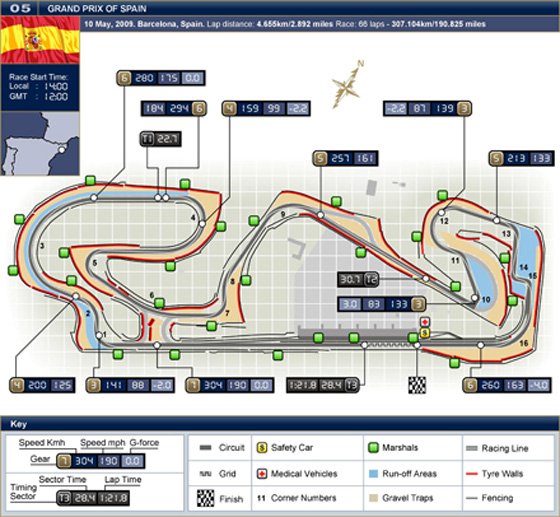 • A large section of the gravel at turn 3 has been replaced by asphalt.
• New kerbs with better drainage behind them have been installed on the apex of turns 5, 11 and 15.
• The rear of the gravel trap at turn 9 has been raised by 1.5m to give it a gradual upward incline, the gravel itself has also been renewed.
• The kerb and the artificial grass behind it on the exit of turn 9 have been extended by 10 metres.
• An additional conveyor belt has been fitted after two rows of tyres in the five and six row sections straight on at turns 1, 9 and 10.

• Improvements have been made to the circuit with regards to safety. A total of 440m of conveyor belts along with 1,150m of water collection channels were connected and a total of 360km of kerbs renewed. The total length of the new tyre barriers is 3980m which includes 19,000 tyres.

And all the teams who tested here are now arriving with new aero bits, chunks of carbon fibre, pocket knives, race tape n band-aids to stick all over the cars, which they get to test on a green track on Friday.
But they don't have to try to pick 8nPole.

All the cars have been revised but the most notable is the BMW Sauber. It is sporting a totally new front wing

Vettel and Webber do 2 installation laps, the rest just 1.

Hamilton, Raikkonen and Barrichello yet to go out
Top

All the drivers have now completed their installation laps.

Trulli returns to the track.

Weather is sunny, air temperature at 19 degrees while track temperature is at 22 degrees
Top

It is all quiet now!
Top

Fisichella on the track now
Top

Fisichella pits after another installation lap!

It is quiet again
Top

Alonso gets in his car and there is a lot of applause from the crowds on the main stand opposite the pits.

Bourdais is on the track
Top

Glock on the track as well.
Top

Trulli on the track as well.

For reference, the fastest time during winter testing here was in the 1:18's!
Top