Kamui Kobayashi and Marcus Ericsson today revealed CT05, the Caterham F1 Team car the Japanese and Swedish drivers will be competing with in the 2014 FIA Formula One World Championship. 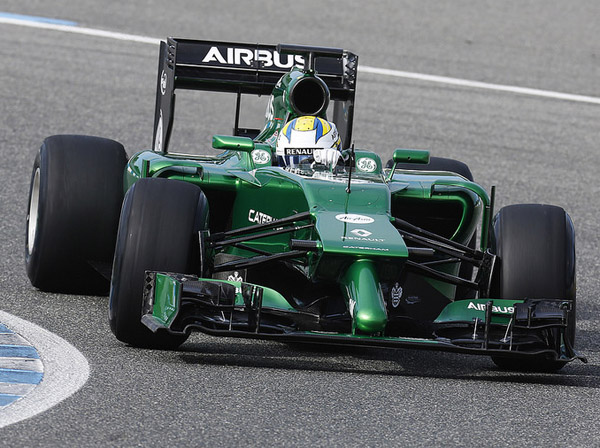 The first car to be fully designed and built at Caterham's Leafield Technical Centre, CT05 is the team's answer to the all-new F1 regulations that have come into force in 2014. The car will race in Caterham's new all-green 2014 livery and, for the fourth year in a row, will be powered by Renault Sport F1, using the new Renault Energy F1 engine mated to a Red Bull Technology gearbox.

Cyril Abiteboul, Team Principal and CEO, Caterham F1 Team: "Having Kamui and Marcus unveiling CT05 is a proud moment for me and the whole team, especially with both F1 and Caterham entering a new era in 2014. Our shareholders and partners have made major investments in the people and facilities at Leafield, giving us a platform to work on the 2014 car that is now much closer to many of the teams ahead and, this year, there is no reason for this to not materialise directly to performance on track.

"We believe CT05 is a good starting point for us to deal with the new regulations and their associated challenges, in particular in terms of reliability. We have a lot of very talented people at Leafield who have worked tirelessly to bring this car to life and everyone has played a part in helping us exceed all the targets we set. We obviously won't know where we really are in relation to the other teams until the first race, but we believe we have answered the challenges presented by the new regulations as effectively as we can.

"We also have very good reason to be positive about how this car will develop throughout the season ahead. Thanks to our relocation in 2012 to at the core of the 'F1 valley', and a highly selective recruitment plan, our staff are now a good mix of experience and young talent and we have moved our wind tunnel program to the Toyota Motorsport GmbH (TMG) facility in Cologne, Germany. This means we are now working at 60% scale, a significant improvement over our previous facility and another sign of just how serious we are about making real progress this year. In addition to the TMG move is an improved partnership with Dell/Intel which gives us, among many other benefits, a major upgrade to our CFD capability, a critical part of our design toolbox that is even more important this year with the rule changes governing wind tunnel use in 2014.

"In Renault Sport F1 and Red Bull Technology, we have technical partners that have powered the World Championship-winning team for the last four years and, while we are realistic enough to know we are very unlikely to be competing at the front of the grid, there is no reason why we should not be fighting higher than we have done since we came into the sport in 2010. We have extensive experience of working with both Renault and Red Bull, and that is going to be crucial this year. Reliability and energy management will play a key role in 2014, especially early in the season, so our experience of working so closely with both organisations since 2011 will definitely help throughout the course of the season.

"We have team partners with us again in 2014 that are the envy of the pitlane. I have already mentioned our increased partnership with Dell/Intel, but I also want to highlight the work we are doing with GE and Airbus Group. In GE we have a partner that has world-leading R&D, technical resources and people, and they have played an active role in the design and development of CT05. In addition to GE we also have Airbus Group and the benefits of a partnership with a company that leads the world in aeronautical design, testing, manufacturing and usage are obvious. Our technical integration with Airbus will grow throughout the season and it is this sort of true partnership that will help us achieve the goals we have set for 2014 and beyond.

"Behind the wheel in 2014 we have a good mix of experience, pace and passion in Kamui, and with Marcus we have given another GP2 star the chance to make the step up to F1. His career has led him to 2014, the season he makes his F1 debut, and we are confident he will make the step up to the top level in the same calm yet quick manner he has shown throughout his career. Helping Kamui and Marcus develop the car throughout the year will be Robin Frijns and Alexander Rossi who will be our 2014 reserves. Robin is an undoubted talent and we are pleased he sees that, with us, he can prepare fully for a future F1 seat. Alexander has been with us since 2011 and we have seen him develop enormously since then. Now he has a real chance to fight for the GP2 championship throughout 2014, and to continue his F1 development at non-GP2 race weekends and in our simulator."

Mark Smith, Technical Director, Caterham F1 Team: "Despite the major rule changes introduced this season, our design philosophy was actually only slightly different to usual for a totally new car. We have still sought to maximise aero and mechanical performance within the regulations but there has been more emphasis than usual placed upon weight reduction and, bearing in mind how critical reliability will be this year, we have been slightly more conservative in the areas around the new power unit - cooling systems, exhausts, heat management etc.

"At the front of the car, the area that will obviously inspire most debate, we have focused a lot of effort on optimising flow structures around the nose, the front of the chassis and the reduced-width front wing area, all in response to the 2014 regulation changes. However, the package we start testing with is by no means our definitive answer and we fully expect to evaluate alternative solutions throughout the course of 2014, particularly now our 60% scale work has started in the TMG wind tunnel in Cologne and our improved Dell/Intel HPC (High Performance Cluster) is coming on stream, significantly stepping up our CFD resource.

"Overall, there were a number of other major areas the design team focused on - the front chassis height led us to opt for pullrod suspension which gives us the best solution from both a mechanical and aerodynamic perspective. Another focus area was cooling - charge air cooler packaging has driven the cooling architecture and consequently the sidepod and rear-deck bodywork and, at the rear end of the car, our development has been driven by the removal of the beam wing, again as per 2014 regulations, and the exhaust blowing effect we've seen in recent years - this has created a challenge all teams will face, how to recover the rear load generated by those areas in previous seasons, and, again, something that will continue to develop throughout the season ahead." 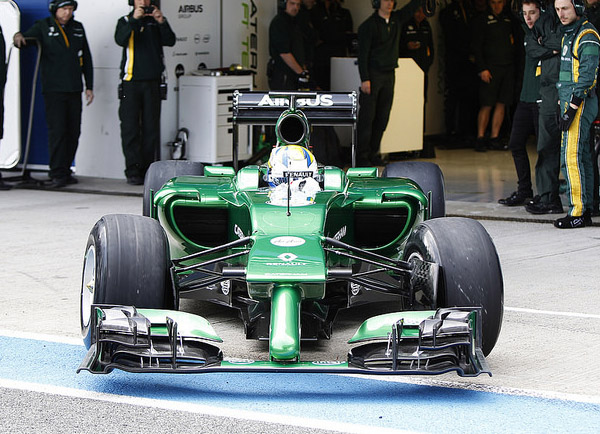